I have a lot of rambling to do about YouTube stuff so I’m splitting this monthly review into two parts this time around. Starting off with all the video things.

My YouTube progress is as strong as ever. My target for February was to hit 2000 subscribers. By midnight on the 28th I was at about 1950 and about one day into March I hit 2000. Given I didn’t think I’d get anywhere near my goal, I’d call that a big success. At the time of writing my YouTube channel currently has 2077 subscribers!

Time for some numbers and graphs, yay! 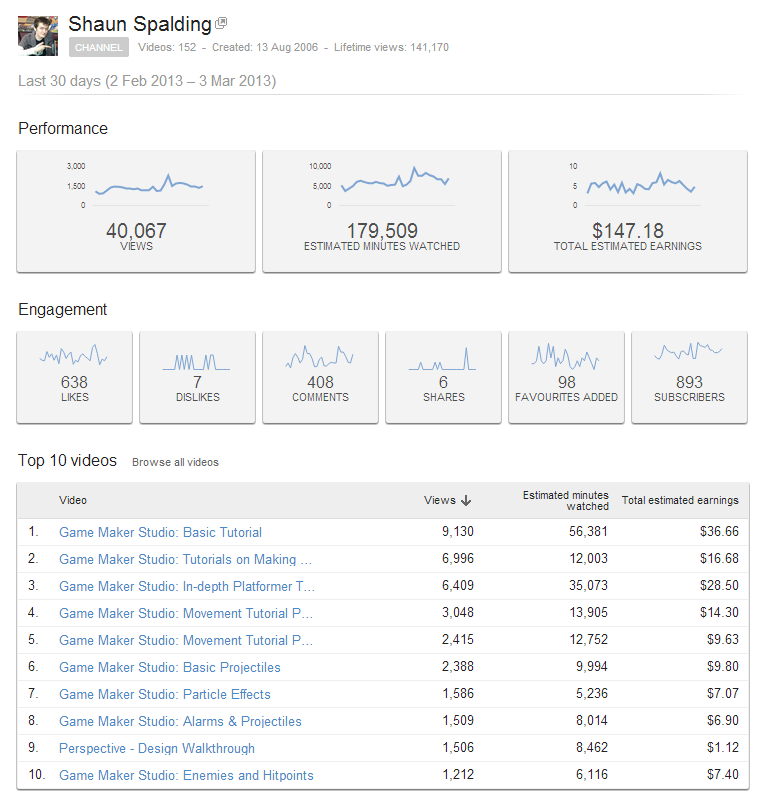 So my numbers are up a long way since January. My views per day across all videos is somewhere around 1450 on average. One of my goals in January was just to hit over 1000 per day so this has been going nowhere but up. I did a bit more free marketing for the channel by spreading links, bumping forum threads and also dropping another link on Reddit. This time to my In-Depth platformer tutorial. This link did a lot better than my last one, probably just because of the higher quality content. The main benefit I get from doing this kind of link spreading is new subscribers. The number of views I bring in from external sites is pretty negligible. Almost all of my significant traffic comes from YouTube searches, related videos and Google.

This tells me a few things; both about how to grow my channel effectively, and about the longevity of my content. Tutorial content will bring in a steady flow of traffic whilst there is a steady supply of people looking for the content. People have to actively be searching for Game Maker tutorials to find my videos, and have a real desire to learn the program in order to watch or subscribe. What this means is my content should bring in traffic until it becomes outdated, or GM is obsoleted/just drops out of use. It also means my traffic is capped at the number of people who exist at any one time who have the desire for this content and ability to access my videos. But I think this changing figure is much, much higher than the traffic I currently generate. Leaving me lots of room to grow.

I’m also bringing in very solid ad revenue ($147 this month) thanks both to increased views, and partnering my channel with a new ad network. The ads on my videos generate nearly 5 times the CPM I had been making from standard Adsense. So while again, the ad revenue was never the ultimate goal of this project, it’s now actually a fairly significant (and fully automatic) stream of income.

I’ve finally adopted a release schedule for my videos. I record tutorials on Sunday and upload them Monday evening. One tutorial a week, with potentially a bonus video that is not tutorial related. This firstly gives me some breathing room from trying to just push out content as quickly and as often as possible. Which I think will always see diminishing returns after two videos in a week. After the second video I upload in a week I feel like uploading any more just wastes content that could have been saved for later or spread more widely. It’s also important to produce content within the bounds of some kind of routine to prevent burn out, or even just drifting on to new projects. Secondly this helps my subscribers learn when to expect new content from me, helps them understand that I will regularly produce content and my channel feels more reliable. This should help keep the attention of my audience, as without a pattern or schedule, it’s easy for viewers to forget to check a channel for new content (as they don’t know when to expect it and when not to).

One of my ‘bonus videos’ this month was a design review of Perspective. Uploaded mostly as marketing for the game, this video did help boost sales somewhat but realistically I don’t think I’m ever likely to see significant profit from this iteration of the game. I personally see pushing the game as a practice marketing exercise. Seeing what works, and what doesn’t. That said, the small amount of revenue that Perspective brings in is still nice to have. It’s given me a lot of appreciation for the ‘Pay what you want’ model.

I’m in the process of updating my video thumbnails with text that is easier to read. Hopefully to give a boost to my related/suggested videos traffic. Thumbnails are overpowered. Never underestimate the strength of good video thumbnails. There’s a number of other polish touches I really want to put into my content when I get time. I worry that I’m starting to produce these videos by flowchart and I’ve stopped experimenting within the content itself. I need to keep improving!

‘Making Games’ has a lot of potential beyond what it has accomplished already. It’s important that I don’t get comfortable with its success so far and keep striving to make better content.
-S