So of the projects neglected over Christmas my youtube channel was one of them. I regularly monitored it’s progress but didn’t actually produce or upload any new content between early december and the start of this week. Yet my subscriptions and views sky rocketed seemingly without any input from me.

For some reason I had this natural assumption that if I produced a quality piece of content, it would gain a sharp burst of views that would then steadily trail off, day after day. I couldn’t have been more wrong about how this stuff works.

My first two videos continued to accelerate long after their first week. Not get more views, accelerate in views. That means the rate at which they were being viewed was increasing. From 40 views a day, to 50, to 80 to 100 and so on. As the videos were being watched more and ‘liked’ more and I gained subscribers my videos have started showing up more highly in searches and in related videos lists. This has lead to some of my videos generating a guaranteed stream of viewers for a potentially enormous length of time. Without me even producing any more content. 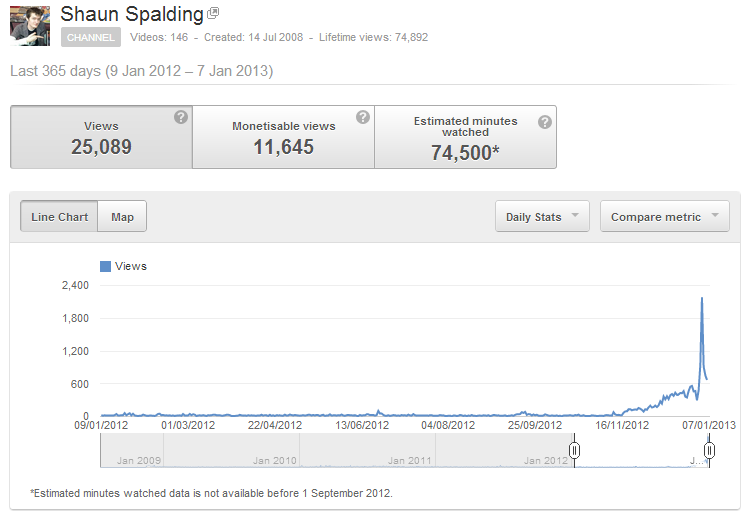 Ignore the one enormous spike for now, I’ll cover that in a moment.

This has been amazingly encouraging. I’ve made a point of trying to make the snowball roll faster wherever I can, posting links to Reddit, the GMC forums and so on. Then suddenly on the third of January there was an enormous ten fold increase in subscription rate and views that lasted a bit more than 24 hours. I figured this had come from some specific link that had gone viral, a friend plugging me on Reddit, or some specific source. But literally every source of traffic had increased by the same amount. 70% of my views were still coming from youtube searches and suggested videos. While I was slightly higher in the searches than I was previously it wasn’t enough to suggest this kind of enormous traffic boost.

Then it hit me that there was a flash sale on Game Maker: Studio on steam on that very day. 66% off. The most likely explanation is a large number of people have bought game maker and in looking to get started have turned to Youtube and found my content waiting for them. Pretty convenient! Part of my theory with the videos in the first place was that with a new version of game maker (studio) released on a platform like steam, more people would be looking for content now or very shortly. Turns out that was a smart guess. My viewer/sub rate has since decelerated from it’s short-lived ‘boom’ somewhat but there have been definite lasting impacts. My search visibility has gone up a ton, and as you can see if you ignore the spike then my growth rate is still going nowhere but up. A pretty good week!

I’ve started to put out content again and I’m paying a lot of attention to this project right now. More than I originally planned to. The positive results and feedback is very motivating. I gained more than 100 subscribers from one twenty four hour steam sale. (Total is around 560 at the time of writing.) Just goes to show you how powerful those sales really are. They affect a lot more than just their own markets!