‘Gating’ describes a method in game & level design for creating linear paths through what would outwardly appear to be non-linear worlds. The Zelda series is basically a master class in this technique. While providing you with a world you can explore at your leisure, important plot areas and stages of progression are always blocked off until you arrive at them when the game wants you to. Often by acquiring a skill or item that allows you to pass the previously impassable.

Often a game will do this by gently leading you down a path that seems to reach a dead end, a huge boulder blocking your path. (Dodongo’s Cavern in Zelda: Ocarina of Time) At this point the game might give some subtle reference to how you might bypass the obstacle, with varying levels of explicitness. “Oh if only we had some kind of explosive!”. 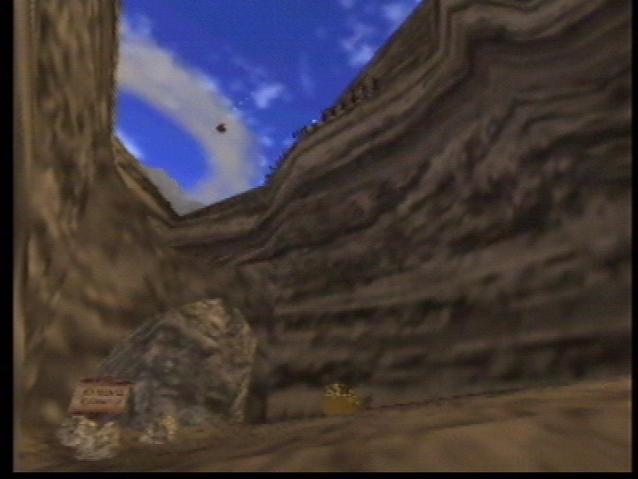 Getting the Goron’s bracelet from Darunia allows link to pick up Bomb flowers, and consequently open the next dungeon. Convenient!

I’m actually a big fan of this technique when it’s done with some believability or subtlety. The whole world of Ocarina of Time is meticulously gated to give the player just enough freedom to explore huge areas and wander completely off the beaten path, but then keep them from entering dungeons or areas they’re not ready for. Often concealing them, or just providing clues to tease that a place will be very important later in the quest. The world slowly grows before you and when done correctly creates a fantastic sense of mystery and gradual exploration.

Gating isn’t only used to control the game progression, it also allows the designers to give much greater depth and value to any area of the game world. Often secrets or special items will be kept in a location very visible but also totally inaccessible to the player. Ocarina of Time did this a lot with Heart Piece containers which were very valuable to the player. They would place them in sight in a location the player had no way of reaching when they first entered the zone. And if it’s their first time playing the game, probably have no understanding of how they could ever reach it despite realizing that the ledge or cave or pillar must be somehow accessible. This makes a player think about what else could be in the area that they haven’t seen, it makes them want to explore and uncover mystery. They might not be able to reach every nook and cranny of the zone now but they will come back later fully equipped with boomerangs, hoverboots, hookshots, bombs and so on and can now solve puzzles that were a total mystery before.

I keep referencing Ocarina of Time because it just happens to be my favourite example of this style of level design, but the technique is massively prevalent in all kinds of RPG and action adventure games. It’s something I honestly miss and don’t seem to see very much in modern linear experiences. Assassins Creed 2 (and onwards) for example gives you a huge amount of sandbox freedom. You can run, jump and climb anything anywhere. There are secrets hidden about but they can all be reached right away if you know where to look. The game progression is controlled in a much more direct manner. Mission triggers simply only appear in sequence, or the game won’t physically allow you into areas it doesn’t want you to be. As a result the game world often actually feels small and known. Despite probably covering several times more space than Ocarina’s game world. Which feels enormous and full of mystery. It is gated by its game mechanics and not by hard limits. As a result, speed runners and hardcore fans have often found ways to glitch and bypass these areas with unintended methods. Sometimes breaking the game event sequence. This is often enormous fun for devoted fans, and the idea that “maybe you CAN get up here without the hoverboots!” is much more appealing than the set in stone knowledge of where they can and cannot access and when.

Gating isn’t always done well though. Sometimes it can feel arbitrary or artificial when a player is asked to trek across the world to find some mundane object that will allow them access to the dungeon. Typically the technique is done best when hints are subtle, the solution is interesting, and involves the player learning a new skill, power or mechanic. If you can confound players with how they access an area early in the game, then simply teach them the mechanic they could have used all along much later in the game then that would be the holy grail of gating.

VVVVVV, is a fantastic game that intentionally involves no gating whatsoever. Beyond the shape of the world and pathways, the player is allowed to explore to their hearts content and is gated only by their own skill. This means when you get stuck dying to an area over and over you can just go somewhere else. There’s no fixed path you have to follow. There’s a beginning, an end, and the middle can be done in whatever order you like.

It really depends what kind of game you’re making, but I would really like to see this aspect of level design treated with more respect in modern games. When players complain of boring linearity in shooters and so on, the developer response appears to have been to create more sandbox games where you have total freedom. I don’t think this is what the players really want. I also don’t think linearity is binary by nature. I think you can create a controlled experience, with a linear sequence of story events; whilst creating an expanding game world that feels deep, large, mysterious and can truly be explored.